Understanding how BigPanda determines which events are correlated into an alert and which alerts are grouped together into incidents can help you configure and use BigPanda more effectively.

After merging events into alerts, BigPanda provides additional noise suppression and improved visibility by clustering highly related alerts into a single, high-level incident. For example, a connectivity problem may cause several checks on the same host to enter a critical state. All of these alerts are clustered into a single incident so that you can see up-to-date information from each check on the same timeline. BigPanda uses correlation patterns to define relationships between alerts and applies pattern recognition to dynamically cluster alerts into incidents.

BigPanda can correlate a maximum of 300 alerts into a single incident.

Correlation patterns define the relationships between alerts by using the following parameters:

To learn more about a tag, you can view an alert in the BigPanda UI, reference the documentation on standard tags, or review the custom tags defined for your organization.

The default correlation patterns are:

If multiple correlation patterns match an incident, the pattern with the longest time window is the one that appears in the UI.

Merge Alerts into an Incident from a Single Host

A single incident in BigPanda can contain one or more alerts. Alerts are merged into the same incident if they have the same application key and primary and secondary properties. The current status and properties of the incident in BigPanda represent the most recent alert, which is determined by the timestamp property.
In the following example, these two alerts would be merged into a single incident with a status of Warning and the description CPU is above warning limit (40%).

BigPanda uses the timestamp to determine the latest status of an incident. If it is not included, BigPanda uses the time when the alert was first received. To ensure that BigPanda accurately reflects the most current status, when sending multiple alerts, you must include the timestamp for each alert or sort the incidents array by when the alerts occurred, in ascending order.

To achieve dynamic clustering, BigPanda keeps track of all the patterns that match an incident, and matching patterns are evaluated in real time. When a new alert is received, BigPanda evaluates it against any patterns for active incidents that are within the start time window. If the alert matches a pattern for an existing incident, it is added as a related alert, and any patterns that no longer match all of the related alerts are eliminated as matching the incident. If the alert doesn't match an existing incident, a new incident is created with any patterns that match the alert. The incident title is determined by the matching pattern with the widest time window.

As new alerts are received, the process continues, and incidents become more well-defined as more information is available. After the time windows of matching patterns have elapsed, no new alerts are added to the incident. The Incident Life Cycle Logic is determined by the alerts it contains, and the incident remains open until all related alerts are resolved.

Once normalized and enriched, the alert begins the Alert Correlation process:

First, BigPanda checks to see if the new event matches an existing alert in an incident. The system checks the event incident key to determine if the event is a match.

If the event properties match an alert in an active or recently resolved incident, the event is added to that incident as an alert.

If the new event status changes (For example, Warning to Critical), the tag values will be merged into the last event.

If it does not, the next check is performed.

If the event does not match an active correlation pattern, a new incident is created.

It’s possible for an alert to be added to an incident even if it does not match some of the active matched patterns. When this happens, the patterns that do not match are deactivated. Deactivated patterns remain attached to the incident, but alerts are no longer correlated into the incident based on these matches.

The Incident Title is Updated

The incident title is updated based on the active matched pattern with the largest correlation window.

If the incident has only one entity, the title is generated based on the primary and secondary properties of the active entity.

Incident titles can change as alerts join the incident and change status.

The Incident Status is Updated

The incident status is updated based on the status of the most severe active entity.

Incident titles give you insight into the scope and impact of an incident. The titles are dynamically generated based on how the alerts are correlated and how many subjects are affected.

Incident titles are generated based on the following logic: 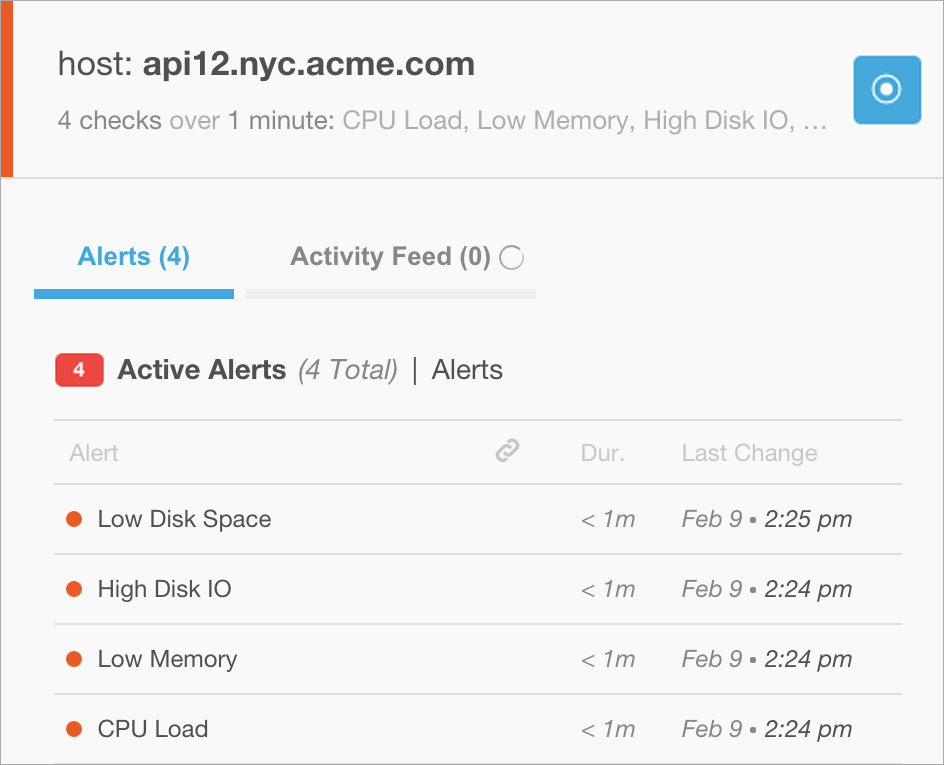 Hosts Correlated by Cluster and Check 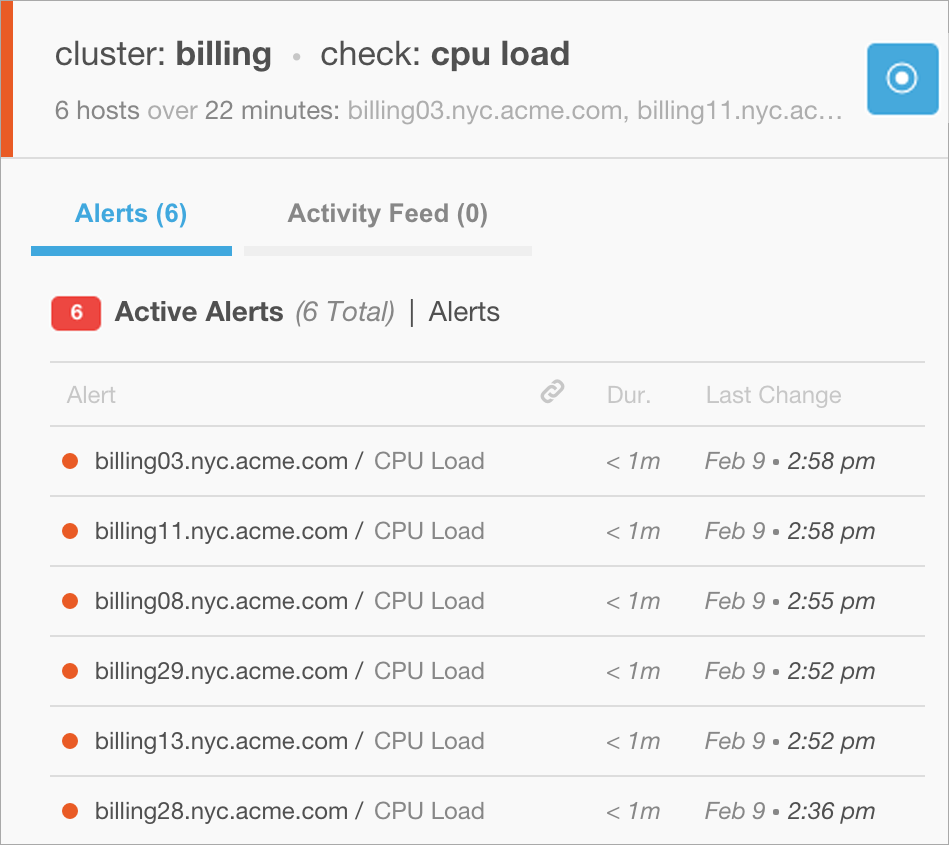 This example demonstrates a type of incident that commonly occurs when a network switch fails. In the example below, the main title indicates that the Dublin data center is experiencing a ping issue. The subtitle indicates that a total of 243 hosts reported the problem over a time span of 4 minutes. Also, the subtitle lists a few examples of the hosts. 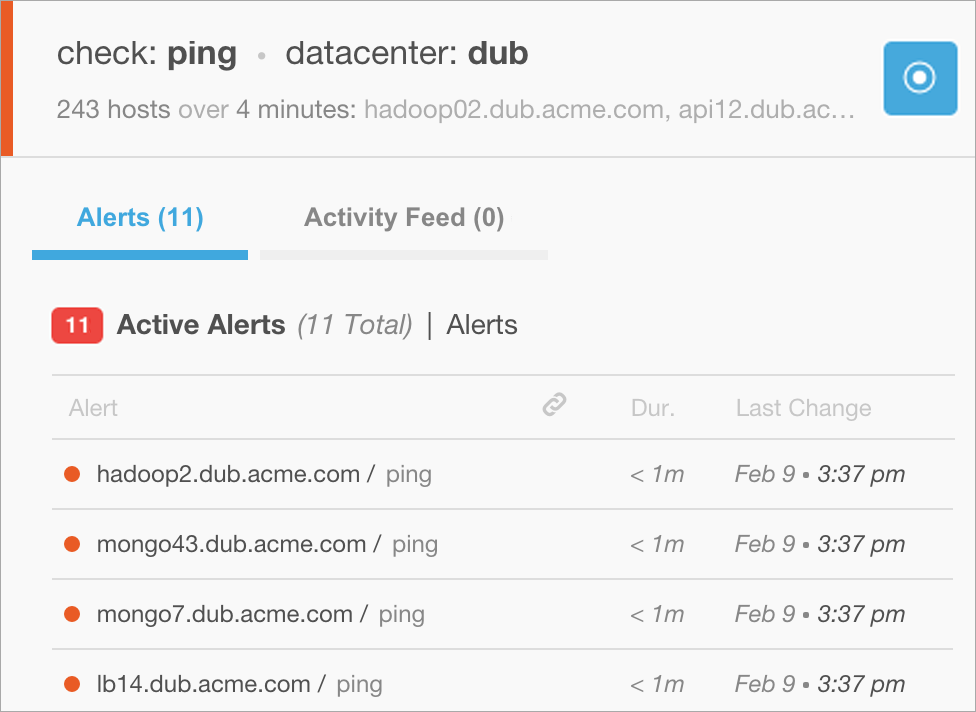 In the example, six different nodes in the same MySQL cluster began sending load-related alerts within 29 minutes of each other. Some of the nodes recovered momentarily before returning to a critical state, while others remained critical or in a warning state. BigPanda grouped more than 75 critical and recovery events into a single incident, and displays them together into a timeline that makes it easy to spot which alerts occurred first, and what nodes alerted later.

In this example, two different alerts came in for the same application. The alerts then proceeded to resolve and reopen in rapid succession. When an alert is changing states frequently, or flapping, it may generate numerous events that are not immediately actionable. BigPanda grouped each of these potential notifications into one ongoing incident to maximize visibility without overwhelming your team with duplicate notifications.

To learn more about when incidents are resolved, reopened, or considered in a flapping state, see our Incident Life Cycle Logic documentation.